In this section, we inform you about some of the news concerning Dürrenmatt internationally.

«The judge and his hangman» - Chinese translation

Crown Culture Association published the Chinese translation (traditional characters) of Friedrich Dürrenmatt’s crime novel “The Jugde and his Hangman” on 27th December 2021 in Taiwan. Trade Office of Swiss Industries in Taipei together with the publisher hosted a book launch event at Eslite Bookstore in Taipei where Professor Hui Chun Cheng from Department of German, Tamkang University and Editor-in-chief Ting Ting Hsu spoke about Dürrenmatt’s life, work and the importance of the newly published book to a full house of enthusiastic audience. Many Taiwanese crime thriller authors have also written articles to recommend the book. “Romulus der Grosse” is the other book that has been published in Taiwan.

For the centennial of Friedrich Dürrenmatt’s birth, the Consulate General of Switzerland – together with the “Centre Dürrenmatt Neuchâtel CDN” – gave through different activities an insight into the life and works of the famous Swiss author, dramaturge and (less known) painter Friedrich Dürrenmatt.

On October 28, the German department of the “Universidad de Zaragoza” opened an exhibition on the life of Dürrenmatt on their campus in the presence of members of the Consulate General.

In the “Center de Cultura Contemporànea de Barcelona - CCCB” on December 2nd, the “Associació de Germanistes de Catalunya (AGC)” organized a panel discussion entitled “Dürrenmatt, fer visible el món”, in which famous local actors and theater directors took part. Their experiences with pieces by Dürrenmatt in Catalonia were discussed. The event concluded with the reading of texts in Catalan / German by the two actors Arthur Haering and Neus Pàmies.

Film cycle in the “FilmoTeca” in Barcelona with the films “Justice” (December 2nd), “Dürrenmatt - a love story” (December 14th) with a virtual introduction via zoom by Ms. Madeleine Betschart / Head of the CDN and “Hyenas” (21st December).

On December 14th, the “Universitat Autònoma de Barcelona - UAB” opened an exhibition in the library of the Faculty of Philology and Humanities in the presence of representatives of the Consulate General of Switzerland in Barcelona. Parallel to the exhibition, which will be shown until January 31, there will also be a video about the life of the Swiss art all-rounder.
In the afternoon at the same university a video conference on the diverse works of Dürrenmatt took place in the translation and interpretation faculty with Mrs. Madeleine Betschart, Head of the CDN.

Between students of the German language at the “Universitat Barcelona - UB” and Mrs. Betschart a virtual exchange took place on December 15th via ZOOM, in which, among other things, “The visit of the old lady” could be thematized and discussed.

In November 2021, Dr. Julia Röthinger (CDN) participated in an online discussion about graphic novels: How can we learn about history, social justice and past traumas through graphic novels?

A joint initiative of the University of Victoria and the Consulate General of Switzerland in Vancouver.

The Play “The Ward” - Vancouver

For the centennial of Friedrich Dürrenmat’s birth, the Consulate General of Switzerland in Vancouver presents "The Ward", a fictionalized sequel to Friedrich Dürrenmatt's "The Visit". Convicted of the murder of Alfred Ill and locked up in a mental institution for 10 years, the former headmaster of Güllen must now convince a panel of doctors of his innocence. Written by Joel Mark Harris and directed by Josias Tschanz, the play is performed by actor Georgie Daburas.

The Visit – Revisited in Bangladesh

For the centennial of Friedrich Dürrenmatt's birth and 16 days of activism against gender-based-violence, feminist organization Bonhishikha stages a live reading and moderated discussion of Dürrenmatt’s play “The Visit”.

Touching on many issues such as gender and wealth inequality, social development and justice, the Swiss author’s 1956 play “The Visit” keeps gaining relevance in contemporary Bangladesh and Switzerland.

The reading will be live on the Facebook page of the Embassy of Switzerland in Bangladesh on 1st of December 2021 at 2M (Swiss time).

On the 100th anniversary of Swiss writer Friedrich Dürrenmatt, the Swiss Embassy and the Goethe-Institut Israel are inviting to the premiere staged reading in Hebrew of the short story "The Tunnel" by Swiss Israeli actor Meni Gross at the Beit Ariela Library in Tel Aviv.

In spring 2021, Kyiv Theater “Suzirja” presented Dürrenmatt’s play Die Panne that has a great succes in Ukraine. Director of the performance — Taras Zhyrko.

The main actor of the play Mr. Yevhen Nyschuk, the former Minister of Culture of Ukraine, says: “His play helps to find the senses in this world. We have offered the subtitle for this play — “A Stop on A Road”. This stop makes the protagonists to rethink his life, so this play provides a deep, even, I would say, a fundamental existential meaning and importance for our times.”

Exhibition "A century of legacy: A journey to Switzerland through Dürrenmatt" at Tamkang University in Taipei

As part of a series of events to celebrate the centenary of the birth of Swiss author, playwright and painter Friedrich Dürrenmatt, the Trade Office of Swiss Industries in Taipei, in partnership with the Chueh Sheng Memorial Library and the Department of German at Tamkang University, organized an exhibition dedicated to Dürrenmatt's life and works.

The exhibition was held from April 14 to May 31, 2021 at the Chueh Sheng Memorial Library of Tamkang University in Taipei and featured information about Dürrenmatt, the Centre Dürrenmatt Neuchâtel and Switzerland in general.

The aim was to give the Taiwanese public a chance to get acquainted with this Swiss national treasure. In the same vein, the Trade Office of Swiss Industries has initiated the translation of the novel "The Judge and His Hangman" into traditional Chinese, which is scheduled to be published by the end of 2021.

In addition to the exhibition, various lectures by professors on the above-mentioned topics were held. You can find the details of the event under the following link.

Tamkang University Exhibition – "A century of legacy: A journey to Switzerland through Dürrenmatt" 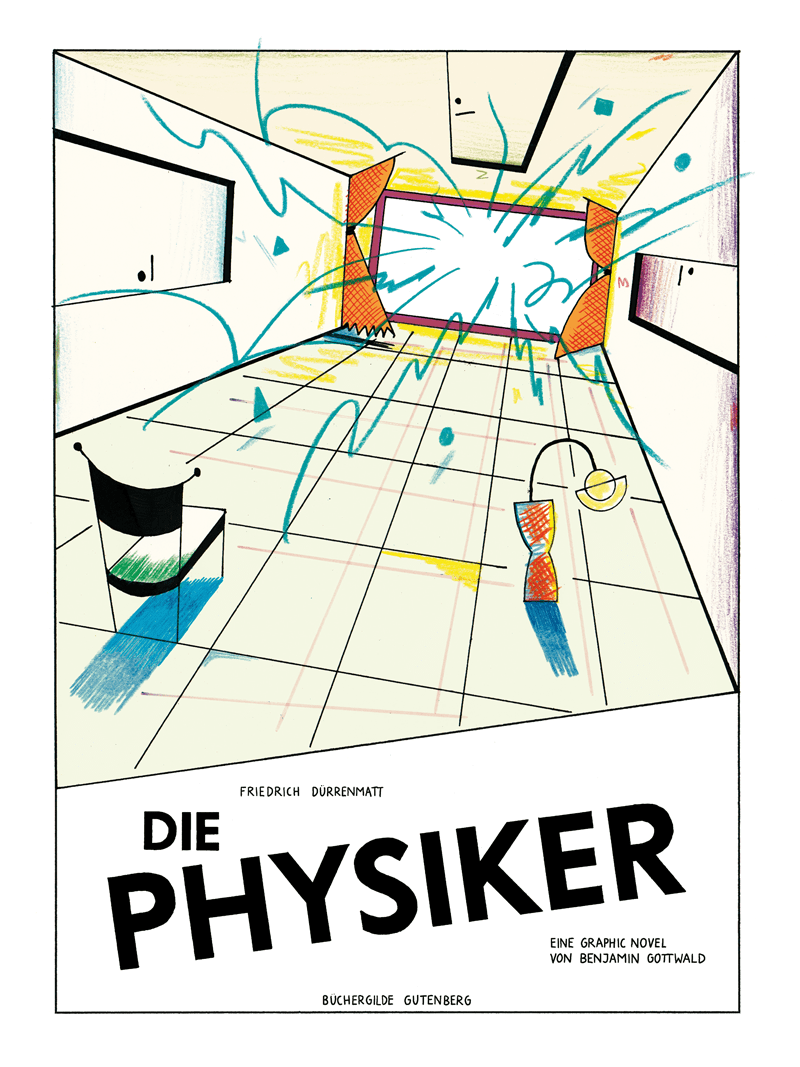 Illustrator and comic artist Benjamin Gottwald adapted one of the literary classics into a graphic novel: “The Physicists” by Swiss playwright Friedrich Dürrenmatt. This May, he presents his graphic novel at the Vancouver Comic Arts Festival in cooperation with the Consulate General of Switzerland in Vancouver.

“The Physicists” is set in a where three physicists are pretending to be mental patients. “The space turns into a fourth madman in my adaptation”, Benjamin Gottwald explains his approach, “it functions as an additional character”. For more insights into the creative process behind his comic adaptation, watch his video presentation.

Behind the Comic: The Physicists with Benjamin Gottwald (VanCAF 2021)

The State Literature Museum in Moscow has opened an exhibition bringing together the paintings of Friedrich Dürrenmatt in dialogue with those of the Russian author Andreï Biély (18 May – 30 June 2021). The exhibition pays tribute as much to their artwork, less well known by the general public and closely accompanied by their literary activity, as to cultural links between Switzerland and Russia.

The exhibition is organised by the Ministry of Culture of Russia, the Swiss embassy in Moscow, the State Literature Museum and the Centre Dürrenmatt Neuchâtel. An article in, unusually, French by Nadia Sikorsky provides further information.

The Russian National Library has also taken over the exhibition

To mark the hundredth birthday of Friedrich Dürrenmatt, the Swiss embassies in the US and the Consulates General of Switzerland in Atlanta and Chicago invited a number of universities and schools to participate in a writing competition. These Swiss representations defined an assignment that met with interest among the students and prompted them to take a closer look at the Swiss author and painter's work.

The awards ceremony also included a panel discussion on the significance of Friedrich Dürrenmatt.

The winning entries for each region are presented in the pdf document below.